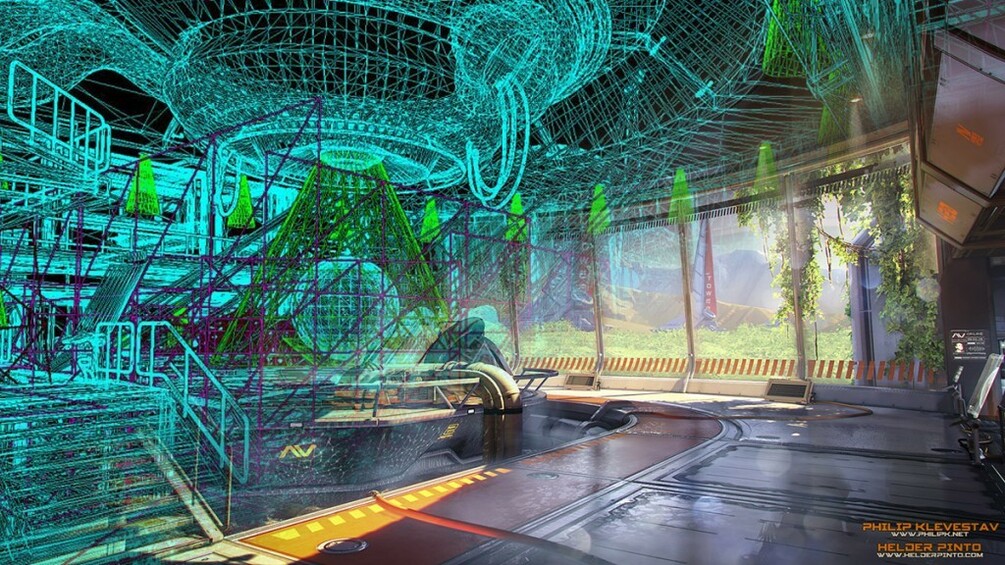 We’re releasing this UDK package (Unreal Engine 3) and map so people can learn from it, don’t use it for any commercial purposes.

Humans have colonized this planetoid called Askalaphos and are in the process of creating an atmosphere similar to planet earth by using a fusion powered atmosphere processing station. The air outside is not 100% breathable yet, but it already allows for the growth of vegetation. Hence the use of H2O as the main element of the scene, the whole point of this facility is to create a breathable and living atmosphere which couldn’t not be possible without… Water! No water, no life anywhere! The scene is set inside one of the outer rooms of the station, more specifically inside one of the big control rooms, featuring a gigantic window with a beautiful view to the outside world, which from that angle you’ll be able to see the other end of the complex, the other towers, natural terrain and the sky. We wanted to make use of bold colors and staying away from the same old desaturated look you typically see in sci-fi, we were also set on staying away from gritty/scary as much as possible and instead try and make the space seem like it’s livable and looking almost inviting. This whole facility is built around the idea of creating life, anyway!

Special thanks: Jordan Walker for releasing his Bathehouse scene, we have learnt a great deal from it and it’s actually one of the reasons we also decided to release our scene, so others can learn from it just as we did from his. Quixel for ndo and ddo, which is pretty much all we used for our texturing. You can still get the legacy ddo version we used in here: http://quixel.se/dDo/dDo_release.exe Mapcore and Polycount for the invulable feedback they gave us during the month we worked on this, check the thread for WIP screenshots and more info on how we did this. Doom3 for the texture designs inspiration and Oblivion for the UI / Hologram designs.

See it in your library

View in Library
Sorry, this item is not available in your location.
Sold out, please go back and pick another option.
7
4.7

Your purchase was successful!

We charged your card and sent you a receipt

Good news! Since you already have a Gumroad account, it's also been added to your library.